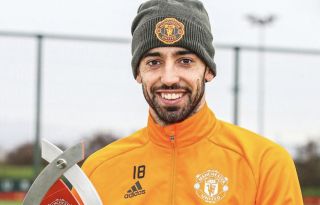 Manchester United midfielder Bruno Fernandes has been snapped showing off his Player of the Month (POTM) award for the month of December.

Fernandes, 27, joined United 12-months ago from Sporting Lisbon in a deal worth £49.5m, as per Transfermarkt.

Since his arrival in Manchester, the Portuguese star has contributed to a whopping 44 goals in 46 matches, in all competitions.

Fernandes enjoyed yet another superb month in December during a festive period which saw the gifted attacker score four and assist a further four goals, including three contributions against bitter rivals Leeds United.

News that the Reds’ Portuguese Magnifico has been voted as the club’s POTM for December was confirmed on ManUtd.com.

Fernandes now has a staggering six POTM awards to his name.

Bruno Fernandes picks up his sixth @ManUtd Player of the Month award 💪 pic.twitter.com/rB5UbNbf9p