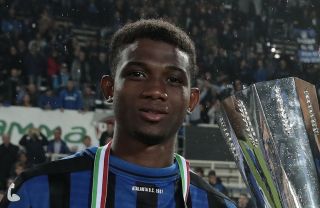 Manchester United manager Ole Gunnar Solskjaer reportedly spoke directly with new-signing Amad Diallo and told him he wants him to join the team straight away.

Diallo, 18, who operates primarily as a right-sided attacker is widely regarded as one of, if not, the, most gifted youngster among all of Europe’s top leagues.

The talented teenager who possesses some incredible technical ability agreed to join United from Atalanta during deadline day of last summer’s transfer window, the agreement was announced on the club’s official website.

However, despite the exciting deal being officially announced, Diallo was forced to remain in Italy for another six-months after work permit and passport complications meant the move could not be finalised before the January window.

Now in January, news that Diallo was on his way to complete his long-awaited United move was recently confirmed by journalist Fabrizio Romano.

Amad Diallo is now flying to Rome. He’ll complete paperworks and documents to join #mufc, then when everything will be completed [in the next few days] he’ll fly to Manchester. 🔴 #ManUtd @Amaddiallo79 pic.twitter.com/sTQ4BjBuXR

There were concerning suggestions that Atalanta were hoping to secure Diallo on a short-term loan deal, however, as we reported on the weekend, United are set to reject any approaches.

The latest in the ongoing story comes from Romano again who has claimed on his ‘Here We Go’ podcast (episode 21) that Solskjaer called his new 18-year-old directly.

Romano claims Solskjaer has told Diallo that his wishes are for the youngster to come straight to Manchester.

Would you like to see Diallo go straight into the first-team, or do you think he should get up to speed with life in England through the club’s youth teams first? – Let us know in the comments.