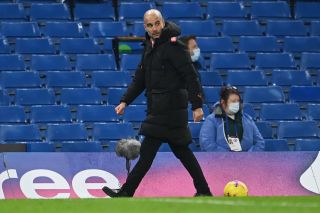 Six Man City players have tested positive for COVID-19 in the lead up to Wednesday night’s Manchester Derby, with a place in the Carabao Cup final at stake.

Pep Guardiola has admitted his side “don’t have many players” available to face Manchester United due to a coronavirus outbreak, ensuring that he gets his excuses in nice and early.

City’s match against Everton was postponed last week after a number of Guardiola’s players tested positive for COVID-19, as per BBC Sport, but they were somehow able to face Chelsea on Sunday, winning 3-1.

I’m not sure how that works when any player or member of club staff who tests is supposed to self-isolate for 10 days. How was it okay for City to play again all of a sudden?

The players who have tested positive include Gabriel Jesus, Kyle Walker and Eric Garcia, while the other three players remain unnamed.

Prior to Wednesday’s EFL Cup semi-final, Guardiola has admitted that the virus has taken its toll on his squad.

“We don’t have many players,” Guardiola told Sky Sports. “To play one, two games is okay but if sustained for a long time — and you can use just 14 or 15 players — it will be more difficult.

“But like everyone in the world, we have to adjust in our lives and our profession as much as possible. We don’t have an alternative.

“The important thing is the guys who have Covid recover well and the others try to avoid it as much as possible.”

What’s the problem with playing the kids?

City released a statement on Sunday condemning the actions of Benjamin Mendy, who held a New Year’s Party.

On top of that, 40 players across the Premier League tested positive for coronavirus in the latest round of results.

“There are other clubs, like Newcastle, for example; every club is fighting about the dangers with Covid,” he added. “This situation is completely new. It looks like we are an island inside the society. It’s like everything is locked down except ourselves.

“When the people say football players are special, maybe it’s the truth. We didn’t believe it before; I always thought the doctors, teachers, architects, every person is the same. But it looks like everything is closed but our business.

“They have to be careful what they do. Social distance, be careful and be lucky because even doing as best as possible, there are risks.”