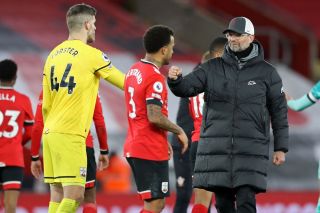 Jurgen Klopp questioned why Manchester United get more penalties than his Liverpool side in a bitter rant following their 1-0 defeat against Southampton on Monday night.

On Tuesday it emerged that Klopp wouldn’t face any action from the FA after the comments he made about referee Andrew Marriner after Liverpool lost at St. Mary’s Stadium — their third successive game without a win.

Klopp felt his side deserved two second-half penalties against the Saints and suggested there’s favouritism when it comes to referees and United.

Basically, the same level of rubbish that came from Rafael Benitez’s mouth in 2009. FACT.

The German coach was particularly aggrieved by the decision involving Mane.

Speaking to Sky Sports, he said: “This boy tries to stay on his feet with all he has. In two situations… other teams will get a penalty for it, let me say it like this. Then the handball, I don’t know who will explain that to me.”

Imagine something like that coming from Jose Mourinho or Sir Alex Ferguson, and the difference in how it’s been handled by the FA.

This really is classless from Klopp, he should be fined & banned for despicably questioning the integrity of an official. Not once did OGS stoop to that level when he was being slandered & couldn't win a game. Christ, how rattled are Liverpool? https://t.co/jZUVNaVfZ9

There’s your favouritism because with Klopp it’s seen as passion.

Let’s not forget how Mourinho was annoyed by the touchline behaviour of Klopp in Tottenham’s 2-1 defeat and suggested he would have been punished for similar actions (via Guardian).