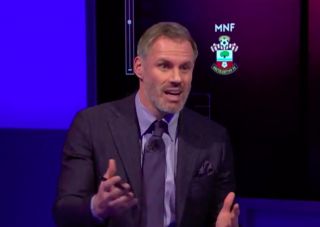 The profound impact Bruno Fernandes has had in his short time at Manchester United means it is no longer irreverent to compare him to greats like Eric Cantona.

Cantona’s arrival at Old Trafford from Leeds United sparked a generation of dominance as he helped United lift their first league title in over a quarter of a century.

He remains the ‘King’ and had an aura that has not been mirrored since in English football.

But Fernandes is now creating his own history at United and is the captain without the armband under Ole Gunnar Solskjaer.

The Portuguese talisman’s arrival last January inspired United to an improbable third placed finish and his totemic start to the new campaign has created the possibility of an even more implausible title challenge.

Jamie Carragher and Paul Ince compared the impacts of the two inspirational figures on Sky Sports’ Monday Night Football with stats from each of their first two league campaigns.

Fernandes is staggeringly averaging a goal involvement every 76 minutes in the Premier League while Cantona managed a goal or assist every 98 minutes.

Of course, Fernandes will ultimately be judged on his ability to drive United towards silverware and Cantona was prominent in four Premier League title wins under Sir Alex Ferguson.

Carragher argues that the key difference will be whether Fernandes can replicate the important goals Cantona scored at the important stages of seasons.

Listen to the debate below. Footage courtesy of Sky Sports.

🗣"The big difference will be if Fernandes can get those vital goals like Cantona did to take you to the title" @Carra23 compares Eric Cantona & Bruno Fernandes' PL stats in their first 2 seasons pic.twitter.com/t2gGKLxzlV