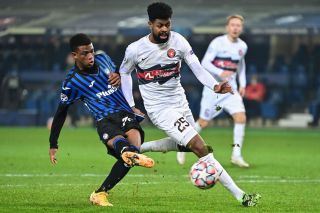 Diallo signed from Atalanta on summer transfer deadline day for £37.2m, as per Sky Sports, and will finally join up with his new teammates in Manchester after he was granted a UK work permit.

The 18-year-old has limited first-team experience in Italy, but is a very highly-rated at United and is expected to be in first-team contention straight away.

Goal reports that Diallo, unlike Facundo Pellistri, also signed in the summer, is seen as ready for the first-team already.

Pellistri, another precocious talent signed on deadline day, has been adjusting to English football in Neil Wood’s U23 squad.

The Uruguayan youngster has netted two goals in six appearances in the Premier League 2 so far in this campaign.

But Diallo is clearly regarded as more advanced in his development and could look to challenge the likes of Daniel James and Mason Greenwood for a starting spot on his preferred right-flank.

Goal note that it is still plausible that Diallo could also feature in some capacity for the reserve side, but he is expected to be given the opportunity to make his mark under Solskjaer.

The report adds that the teenager has flown to the Ivory Coast Embassy in Rome to finalise his visa before arriving in Manchester.