Solskjaer is targeting his first final as United boss after exits in the semi-final stage in this tournament, the FA Cup and Europa League last season.

And the derby played over one-leg due to fixture congestion represents a good opportunity for United to make the final at Wembley on April 25.

United were disastrous at home at the start of the campaign but now have four wins and a draw from five at Old Trafford and have found a winning formula under Solskjaer, inspired by Bruno Fernandes.

But Pep Guardiola’s men have won the Carabao Cup on the last three occasions and defeated the Reds at the same stage last season.

City were back to their irrepressible best in Sunday’s victory over Chelsea and are expected to provide a far more stern test than in the uninspiring 0-0 draw last month.

Dean Henderson is likely to return to the starting lineup for United on Wednesday in place of David de Gea.

Eric Bailly was United’s match-winner with a crucial block against Aston Villa and has earned his fifth consecutive start alongside Harry Maguire in central defence.

Alex Telles could be rotated back in at left-back for his offensive threat but we wouldn’t be surprised to see Shaw retain his place after another solid showing against Aston Villa.

Fred is proving undroppable in the most important games and is set to provide energy and drive in the double midfield pivot.

Scott McTominay was overshadowed by Fred in the victory against Villa but could still retain his place due to his physicality and goal threat from midfield.

Alternatively, Nemanja Matic may be used as a shield for the back four to prevent City punishing United mistakes.

Paul Pogba was ineffective on the left in last month’s fixture against Guardiola’s side but was sublime at times from the unfamiliar position against Villa and Solskjaer needs his most talented creators on the pitch.

Indispensable Bruno Fernandes and Marcus Rashford will continue supporting Anthony Martial in attack, with Edinson Cavani set to serve the second of his three-match suspension. 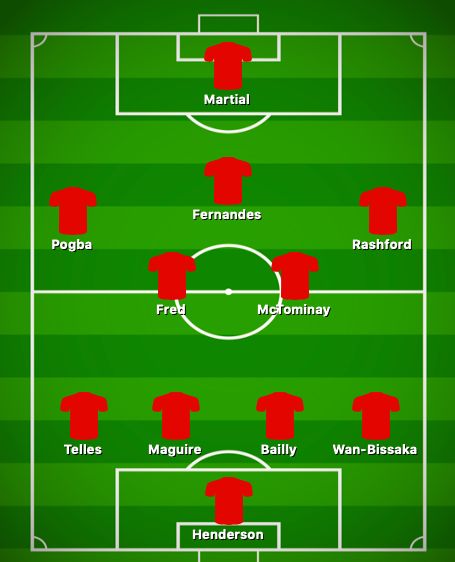