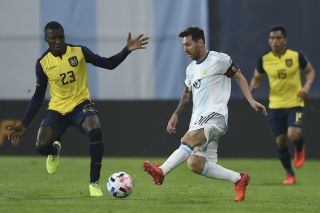 Over the past few weeks, Moises Caicedo has become a familiar name among Manchester United fans.

It was reported by journalist Roberto Omar Machado that ‘no agent, emissary or director’ from United has contacted Independiente del Valle for the defensive midfielder.

Sunday’s print editon of El Diario ran an interview with the 19-year-old, and also discussed the reports linking the player to the Premier League.

Without seeing him in action, I already like the sound of United dipping in the transfer market to find a defensive midfielder. It’s an area of the team lacking but signing a good one could make a huge difference to how we play on the pitch.

Fred and Scott McTominay have done a brilliant job in the centre of midfield but there’s no way Ole Gunnar Solskjaer would put his nose up to an improvement or extra option.

It’s claimed his present club, Independiente del Valle, have yet to agree on Caicedo’s transfer in the winter market which is open right now.

However, the player’s price has been set at €10m, with the report stating (cited and translated by Sport Witness): ‘And in the midst of such talks and negotiations, the young man took advantage of the December holidays to visit his family in Santo Domingo.’

With links to Manchester United and other clubs, Caicedo was asked about the transfer speculation he has been subject to.

“It is very nice to be asked to interview… I did not think I’d grow up so fast. I make a lot of effort and I think journalists also notice that when interviewing me,” the Ecuador international said.

He wishes “to continue growing as a footballer” in 2021 which will only see him gain more interest from Europe.