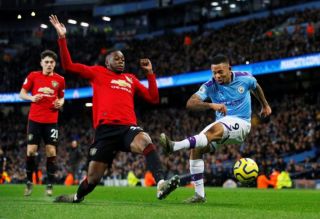 Manchester United will be looking to book their place in the Carabao Cup final when they face Manchester City at Old Trafford on Wednesday night.

The Reds go into the game on the back of a 2-1 victory over Aston Villa at Old Trafford whilst the visitors ran out 3-1 winners over Chelsea at Stamford Bridge.

Head coach Ole Gunnar Solskjaer will still be without Edinson Cavani for the derby who is currently serving a three-match ban however Victor Lindelof could be set to make a return to the first team squad having missed the Reds last few games with a back injury.

In facing Manchester City on Wednesday night it provides United a fantastic opportunity to reach the League Cup final at Wembley.

City are no longer the force they once were under Pep Guardiola. Currently sitting fifth in the Premier League table City have endured a below par season thus far and look a shadow of their former selves. The City side that swept away teams for fun and broke the 100 points barrier is no longer here and should United turn up and play to their potential then they should have too much for their noisy neighbours.

City’s defence hasn’t look right since Vincent Kompany left the club and its that defence which Solskjaer will no doubt look to exploit on Wednesday night and with Rashford, Fernandes, Martial and co all fit and fully firing they should cause the City back four havoc.

In years gone by the League Cup has acted a springboard for United to go on and achieve success and this season it could do exactly that. United find themselves sitting second in the Premier League table locked level on points with Liverpool at the top and should United manage win the League Cup this season it could give the club the momentum and act as the springboard needed to go on and win the Premier League Title.