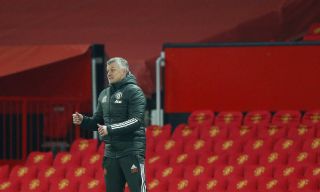 Ole Gunnar Solskjaer’s side have recovered from a difficult start top the campaign but are now positioned second in the league table — only on goal difference after going level on points with Premier League leaders Liverpool.

The league is open this year and Chadwick believes United are in a good position to take advantage of that, but they must keep this level of consistency up to have any hope of brining the title back where it belongs.

It’s been a long time since United have been in a position where you could consider them title contenders. Even the 2017-18 season when we finished second behind Man City were weren’t considered contenders and came 19 points behind our rivals.

Chadwick tells CaughtOffside that United could now benefit from being out of the Champions League early, so they could potentially play a weakened team in the Europa League and focus on the Premier League.

“I think it’s a strange season, we’ve been saying that since the start really — the lockdown, no crowds, some funny results,” said Chadwick.

“For United, a big positive is they’ve probable lay still not ho9t the form they’re capable of, but they’ve found their way up to 2nd place, level on points with Liverpool.

“I don’t think anyone was expected that from them at the start of the season, but huge credit to the players and Ole, the resilience they’ve shown when there’s been a lot of stick aimed at them.

“They’re definitely in a position to challenge as we head into the New Year. Liverpool have got a tough game tonight against Southampton tonight, if they don’t take full advantage then United’s next game could see them go top of the league.”

Of course, being knocked out of the Champions League came as a blow for United.

But when you weigh up the positives, Chadwick is right by saying Solskjaer at least has the league to focus on.

“For anyone associated with United it’s disappointing not to be involved in the business end of the Champions League,” he added.

“At the same time, it does give them an opportunity … if you asked any United fan at the start of the season if they’d rather win the Premier League or the Champions League I think the majority would say the Premier League. That’s what the club’s success has been built over the years.

“If it means sacrificing the Champions League and playing a lesser team in the Europa League then I think it makes sense to put all the eggs in that Premier League basket.

“It is such a strange and open season … Liverpool have shown they’re not quite the same team this season, City are getting some results together now which is going to make things difficult, but United are in a great position.

“They’d love to be in the Champions League and playing against the best players in the world, but I think the majority of United fans would take the Premier League over everything right now. To knock Liverpool off their perch would be a huge achievement.”