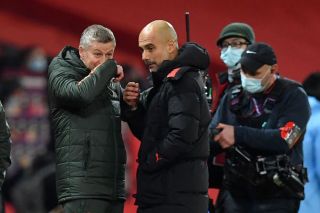 Manchester United and Manchester City will be permitted to make five substitutes in Wednesday’s Carabao Cup semi-final at Old Trafford after an EFL rule change.

United host their city rivals in a bid to reach their first final under Ole Gunnar Solskjaer hoping they will be more potent than in the dull 0-0 draw in the league last month.

And should things not be going United’s away, Solskjaer will have more opportunity to affect the game and utilise his strong squad.

A statement released by the EFL on Monday confirmed all four clubs remaining in the competition, United, City, Tottenham and Brentford were consulted and a change to the rules were therefore made.

Five substitutes will be allowed to take place from each team at three different intervals, as was the case in Project Restart when football returned in June.

Each manager can name nine substitutes in his match day squad for the semi-final ties that will unusually take place over one-leg.

The same rules will also apply for the final of the competition set to be played at Wembley on April 25.

READ MORE: Gary Neville explains what Anthony Martial must do for Man Utd to be title contenders