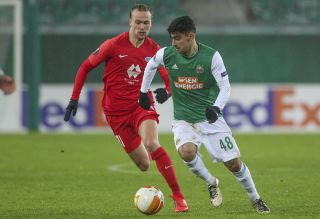 It’s clear that Solskjaer has plenty of faith in the youth players so it’s the academy’s duty to develop players good enough for the first team. Although that has always been the case at Manchester United, I think this manager is making a bigger deal of it than Jose Mourinho and even Louis van Gaal.

Both managers named in the paragraph above have examples of young players they brought into the first team from the academy, but Solskjaer is trying to implement a more long-term plan. That is clear from our transfer activity with young players the past two years.

One of the latest players to be linked is Austrian whizkid Yusuf Demir. Newspaper Kronen Zeitung reports United are one of the top Europeran clubs tracking Demir, along with Barcelona and Bayern Munich.

The 17-year-old is already a starter for Rapid Vienna and has 23 first team appearances to his name, as well as four goals and three assists.

For Austria’s U17 and U15 teams, Demir has scored 19 goals in 22 international matches.

Whereas for Vienna he plays as an attacking midfielder and sometimes on the wing.

The boy dreams big too, telling Transfermarkt he aims to win the Ballon d’Or: “I have goals, such as winning as many titles as possible or even the Champions League. Personally, ever since I was a little kid, I have had the dream go one day winning the Ballon d’Or.”

Demir also names Ronaldinho and Lionel Messi among his idols, adding: “I watched a lot of the two and they shaped my youth.”

Brexit means United can no longer sign non-UK players U18 which means we’ll have to wait until the summer to sign Demir.

With Barcelona seemingly interested and the player idolising two Barca legends, I think I have a pretty good idea which club Yusuf dreams of joining.