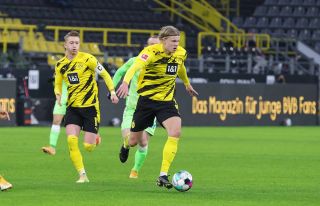 Erling Haaland is arguably the most wanted striker in the world right now. The Norwegian has been the subject of speculation again ahead of the summer with Real Madrid, Man City, Chelsea and Juventus all said to be rivalling Manchester United for his signature.

Instead Dortmund have urged Haaland to follow Robert Lewandowski’s example amid growing transfer interest from United.

The Red Devils have reportedly made the former RB Salzburg forward their prime target after cooling interest in his team-mate Jadon Sancho.

Dortmund CEO Hans-Joachim Watzke believes it’s too early for the youngster to leave the Bundesliga outfit.

Speaking to Kicker, Watzke said: “I don’t think that will happen. Erling and his advisor Mino Rauiola know what they have in us.

“I can only advice him to do things like Robert Lewandowski.”

Well, he certainly scores goals like the Polish forward.

And United need a player like that to really push on. Having a player like Haaland lead the line might even give us a crucial edge in Europe — because we dropped points in the Champions League this season due to not taking our chances.

Lewandowksi also spent four years developing at Dortmund before eventually moving on to Bayern Munich in 2014. He is a more complete striker nowadays and will definitely be an inspiration for Haaland having built his reputation at the same German club.

“Haaland gave himself the time to mature into an absolute world-class player in Dortmund,” he added. “You won’t be able to do that in a year.

“Because it is clear that if Erling should leave us at some point, then he will only go to an even bigger club, and so many are not considered.

“If you join a club like — just for an example — Real Madrid, you have to be world-class.”

Haaland is world-class and I’d take him in the morning if he wasn’t represented by Raiola, who interestingly doesn’t have any clients at Real Madrid currently.

I could still be persuaded because it’s down to the football how his agent represents him. Not every player allows Raiola to speak out of turn like Paul Pogba… See Zlatan Ibrahimovic for example.