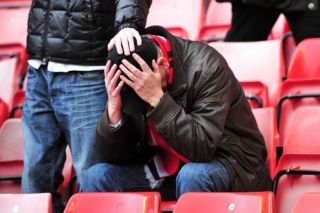 A while back, I wrote an article on the scourge of the Fancam epidemic amongst the United fanbase.

I called out the forever negative, forever click bait outfits who feed (and get paid) off the clicks from fans with what simply appears to be limited football knowledge and who consume their United based news from these outlets.

Back then, I didn’t point any individual fingers at anyone, I left it as a generalised statement, much to the ire of some (Jay, can we be friends?).

As time progresses, the actual culprits come to the fore, more and more, as I realise that the mainstay problem accounts are directly linked through one common theme.

Mark Goldbridge and his merry bunch at The United Stand.

Let’s break this down a little, shall we?

There’s a reason these Fancam channels exist and it’s not for the core reason that some of these began for, to spread United news, to gather fans together and put out the feeling amongst the fanbase, decent (I know it’s a dirty term) “match going reds” sharing the experiences from the ground.

These days, the most respected outlet of this particular style of content amongst fans is United We Stand, a combination of, primarily, a fanzine, backed up by a podcast, where you listen to and read, game by game accounts of match going reds, numerous voices that don’t always agree, give a somewhat a balanced view on the ongoings on and off the pitch, led for the most part by widely respected United fan and journalist, Andy Mitten.

UWS is not controversial, for the sake of controversy. It’s good natured banter mixed with actual match reporting.

Now, let’s get back to TUS.

The United Stand is run by Mark Goldbridge (not his real name), a guy who appeared out of nowhere with his, sometimes funny, outrageous outbursts.

Mark is a clever chap, don’t be fooled by the persona he plays on his social media channels. This is a man who has seen the potential for this and is in it, quite simply, for the money.

Some will focus on the quality of content that will attract clicks from normal, everyday United fans who simply enjoy reading about United.

Mark’s aim, though, as a brand, is to maximise these clicks using popular and trending, negative, opinions.

See, Mark has gathered a few other characters to join his stable, such as “RantsNBants”, “Flex”, “MrRealist”, I’m assuming these aren’t their real names either (bit of a trend there?).

If you’ve been unlucky enough to have these guys opinions shoved down your Twitter timeline, you’ll have seen first hand the vitriolic and damaging comments and tweets they put out, all in the name of building their own individual brand and a collective brand under the TUS banner.

A mix of preying on upset United fans outside the ground after a game, where they can get Andy Tate styled outbursts from the drunken lads who are upset with what they’ve seen and fancy a rant, and a collection of tweets inciting negativity and hatred have been very successful in achieving this for them.

They have come to the fore as the most divisive sector of our fanbase and have done very well in their obvious agenda to build themselves into the shock jock style characters they yearn to be.

From the “Ole Out!” smear campaign to mentions of subconscious racism towards certain players by the club itself, they are pantomime villains of their own creation.

This phenomenon has taken its guidance from Arsenal Fan TV, an outlet from a club that our fanbase used to (and many still do) consider to be embarrassing and a ridiculous thing to have attached to a club.

We have our own now, so let’s not look any further than our own front door (or the front door of Hotel Football) to find your embarrassment.

Luckily a large amount of the United faithful, in particular the home and away, match going reds, are completely against TUS and their methods.

Sadly, they have managed to gain a following.

Until TUS’s gravy train is ended by United fans simply refusing to become involved in this extravagant creation, they will continue to divide our fanbase and create tension and agendas amongst the fans.

The idea of fan channels is not wrong, it doesn’t have to be done in this way, see the newly formed Webby & O’Neill show for example, of how to do a fan channel without needing to use these underhand tactics of negative agendas to produce content worth watching.

Stop buying into this mess, stop allowing such characters as those mentioned to fill your minds with horrendously obvious, negative filled idiocy.

Read more: Are you not entertained?