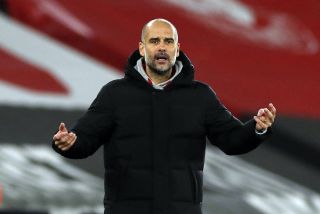 All this premature talk about the Premier League title race sounds a bit silly after just bringing in the New Year, but I won’t complain about hearing Manchester United listed as a contender. The longer that remains the case the better!

Pep Guardiola, however, insists he’s not losing sleep over United’s emergence in the Premier League.

His Man City side travel to Chelsea on Sunday hoping to close the gap on their rivals, and Guardiola is shaping up the title race to be a battle between two Manchester clubs as well as Liverpool.

But it’s the prospect of a title race that is wetting our appetite.

“I am pretty sure Ole is happier than me — but I am not concerned too much about United,” said Guardiola, via the Mirror. “If United are there is it because they deserve it.

“Before I landed here people said that the real Premier League is where everyone can lose to everyone. I didn’t see it until now.

“Now is the first time I see that one team is able to lose or win by seven and then after that draw. The results are unpredictable.”

Despite flirting with the top of the table at one point, Frank Lampard’s Chelsea have just one win in their last five league games. That’s a woeful record that needs to improve if the Blues are to have a decent season.

For all the talk about Lampard not getting to spend last season, he was a big summer spender yet Chelsea have struggled to find consistency in recent weeks.

We’ll be keeping our eyes on that one later.

It was a nice weekend having our game out of the way on Friday night with a win over Aston Villa.

This allowed for myself to enjoy some of the weekend games with a peaceful mind, whilst hoping all of the teams around us drop points.

A draw between City and Chelsea would be the icing on the cake, so long as Liverpool trip over on Monday night against Southampton.