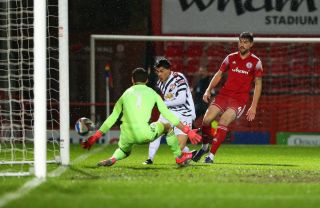 Facundo Pellistri joined Manchester United on deadline day in the summer but has yet to make his senior debut for the Red Devils.

The Uruguayan dreams of making his senior debut for Manchester United after being carefully integrated into the set-up with his new club. Pellistri has enjoyed some game time with the U23s as well as training with the first-team, so hopefully in this New Year we’ll see him in action.

He spoke to ManUtd.com before Christmas to say he’s had a warm welcome at the club.

“I’m settled here,” Pelleistri said. “Thanks to my team-mates and obviously my family from Uruguay, I am now feeling at home in this country, which is all new to me. Most of the South American team-mates are the ones who I am more close to but, obviously, I am all fine with everyone. Every team-mate here is very kind – in the first team, and also the Under-23s who I started playing with. I have met lots of guys who were very nice with me and that is very important.

“People had told me about the weather here and that was the most important thing I’ve found here. Unfortunately, while we have this COVID situation, I cannot go away to most parts of England but, hopefully when these [restrictions] end, I can go. I took English lessons in school in Uruguay but I am learning more here in England.

“It is amazing here. From day one, being here, when I entered the buildings at the training centre, everything is very big compared to Uruguay. That is a very important thing as Manchester is one of the biggest clubs in the world. So I am very happy being here.

“It’s been amazing to train with guys like Rashford, Pogba, Mata and Edi, who is very close friends with me. It’s amazing for me because I watched them on TV and now I am practising with them. The intensity, the high quality they have, it’s great for me to play with them and I improve a lot. All the time, I speak with Edi and he is a very nice person. He is always trying to be around me, giving me advice and everything that I need. He is there to help me and that is very important for me. I am very happy with that.

Settling into new surroundings during this pandemic can’t be easy, but it’s good to hear that everyone at the club has done their bit to help Pellistri out.

On the pitch he’s been busy impressing with Neil Wood’s U23s and that is what he should be focusing on right now.

However, the youngster who feels like he’s at home in Manchester has set an aim to make his first team debut this year, and we wish him the very best with that one.

“I am feeling like it is home,” he said. “I have been here a few months and am getting used to this. I am happy here. It is going to be a different Christmas because we train and we play so it’s different for me. I was used to being free with no training and nothing at this time of the year. I am far from my home but luckily have my family here. It’s not the same but it will be a different Christmas and hopefully a good one.

“It’s been a very strange year for the world obviously and for me, obviously, with the COVID and being here in Manchester – one of the biggest changes in my life – and I am very happy with that.

“It was fantastic [being a substitute for the PSG game earlier this season]. It was a dream for me being on the bench in the Champions League and also in such an important match as it was against Paris, in Paris, and it was a dream for me, being there and watching all the top players that were on the pitch. We were having a lot of fun as, luckily, we won that game and it was a very, very good experience for me.

“Obviously, it’s very nice to hear that the manager speaks about you [as Ole has during his press conferences] and I am in contact with him all the time. He is giving me advice and asking me how I am doing and how I am feeling. That, for me, is very important and I am really thankful to him.

“For me, it’s going to be a dream to have a chance in the first team and to fight for a place. And that Manchester United are going to the top. That is my biggest dream.”

“Yes, that it what I am working on [getting a debut] and, hopefully, I am going to have it.”