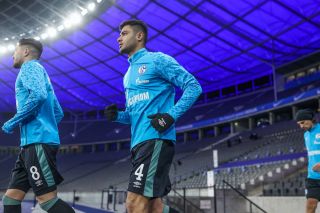 Kabak, 20, only made the switch to Schalke from Stuttgart 18-months ago but has already been strongly linked with a move away.

Since joining Schalke, Kabak has grown to become one of the Bundesliga’s most highly-rated defenders, despite the club’s precarious league position.

The gifted 20-year-old defender who can play in a handful of positions including either side of a centre-back pairing and as a defensive midfielder has featured in 37 matches for Schalke, in all competitions.

Kabak, who already has several international caps for Turkey to his name has already been named the Bundesliga’s ‘Rookie of the Year’ for his defensive displays last season.

It is to be the 20-year-old’s continued impressive form which has seen him become linked with a move to some of Europe’s biggest clubs, including United.

According to a recent report from the Daily Mail, Kabak is also wanted by Leicester City, RB Leipzig and now Crystal Palace.

The Daily Mail claim that Schalke value their gifted defender at around £25m which highlights exactly why there is so much interest in the Turkish centre-back.

It has also been reported that Jurgen Klopp’s Liverpool expressed an interest in the 20-year-old, however, it is believed that the red half of Merseyside are now focusing their attentions on alternative options.