Manchester United’s Diogo Dalot has broken his silence on returning to the club after he left during the summer to join AC Milan on a season-long loan.

Prior to joining the Red Devils under then manager Jose Mourinho, Dalot was highly-regarded in Europe and hotly tipped to become one of the sport’s most effective attacking full-backs.

However, a slow start to his United career signalled a halt in his projected development and now under the guidance of Ole Gunnar Solskjaer, the young Portuguese defender found his game-time limited.

A series of poor bit-part performances mixed with a handful of unfortunate injuries meant the 21-year-old found it harder to shift first-choice right-back Aaron Wan-Bissaka out of the side.

Dalot was handed a career lifeline during last year’s summer transfer window after AC Milan came knocking, looking to take him on a season-long loan.

After joining the Serie A title contenders over six-months ago, Dalot has already featured in 10 matches in all competitions, racking up a 33% direct goal contribution along the way.

There has been suggestions that the Rossoneri may try and negotiate a permanent move in the summer, however, that speculation may have recently been cooled after the 21-year-old spoke about returning to United.

Speaking to Portuguese newspaper Record (as quoted by Sports Witness), Dalot was asked how he feels about the appreciation shown from both AC Milan’s and United’s fans.

“It is always positive to see the feedback from Milan fans and the affection that United fans have for me,” the defender admitted. “It’s fantastic to feel that. But my focus is solely and exclusively on the present.

“The gift is Milan and helping the club to fulfil its goals and mine. It wouldn’t be professional to be otherwise.”

The United full-back was then pressed to answer if his ambition is to rejoin the Red Devils and show the world what he’s capable of, to which he replied: “Of course, the feeling is a little deeper, more because I didn’t have the time I liked physically.

“I spent great moments at United. I played very important games for me and the team. 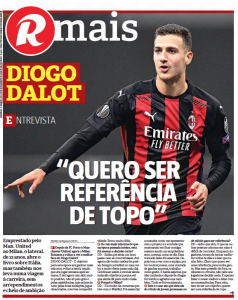 “I left with a bit of a bittersweet feeling for not being physically available for all those games I lost due to injury.

“But it is what it is. I wouldn’t change anything because what I learned was very important for my future and how I am now.

“I don’t regret it or look back with disappointment.”