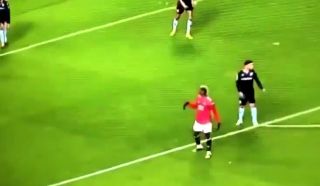 Manchester United find themselves in a strong position in the league after turning their season around, and it finally looks like we could challenge for the Premier League title.

The team looks hungrier than ever when they take to the pitch and we look to be starting games much quicker — going ahead first rather than falling behind. I would still raise questions defensively, but how good was Eric Bailly last night?

Ole Gunnar Solskjaer’s side secured a 2-1 win over Aston Villa on Friday night to join Liverpool on 33 points.

Goals from Anthony Martial and Bruno Fernandes proved to be enough as United got the job done.

The latter scored the game’s winner from the penalty spot after Paul Pogba was fouled inside the box by Douglas Luiz. Everyone’s had their say on the incident, though Villa manager Dean Smith has been most vocal about it being the wrong call, along with goalkeeper Martinez.

However, just minutes before Pogba won a spot kick in United’s favour the Frenchman appeared to tell Luke Shaw to go down after Marry Cash cut across the left-back’s path as he carried the ball into the box.

Check out the video below (courtesy of Sky Sports) as Pogba appears to make a downward gesture with his hand.

Pogba told Shaw to dive next time, gotten to a point where you can't do anything but laugh loool 😭 pic.twitter.com/njN8oVVqqv

It’s not a good luck for the midfielder, but United getting three points on the board is what’s most important. Villa are a decent side and we won last night’s game as the better team.

2 responses to “Video: Pogba hits out at Man Utd team-mate for not going down inside box v Aston Villa”