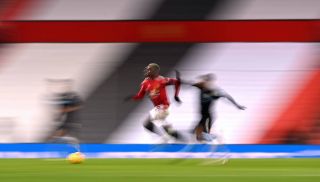 Ole Gunnar Solskjaer set up his side in a diamond formation and they went in at half-time 1-0 ahead.

The Reds started the game well but Villa shaded it for a spell. It was pretty even after that with United having more opportunities on goal throughout.

United knew going into the game they needed a win to keep pressure on Liverpool at the top of the Premier League. It won’t be long before people see us as serious title contenders if we can continue this form and beat Liverpool in a few weeks’ time.

Pogba certainly played his part in the win as he won the penalty that Bruno Fernandes took to score game’s winning goal. Below, we’ve listed some of the tweets about his performance against Villa:

Paul Pogba with a Rolls Royce of a performance against Aston Villa ✨ pic.twitter.com/xEkXnCDLfd

Who was your man of the match? Pogba for me 💫

Overall, that might just have been Paul Pogba’s best display in an #MUFC shirt

He frustrates us and I can’t stand his agent, but Pogba on his day is a very good player who can help United pick up results this season. Solskjaer is trying to get the most out of him as well as the squad, and he’s doing a pretty good job at that right now so there’s no much I’d change from what we have seen in recent weeks.

A lot of fans will still want Pogba out of the club.