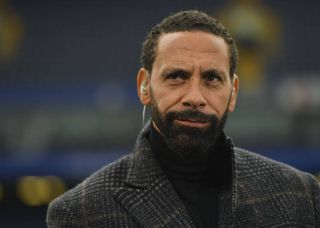 Rio Ferdinand took to Twitter to give his take on the controversial penalty that Manchester United were awarded against Aston Villa on Friday night.

The Red Devils got the better of Villa — winning 2-1 at Old Trafford thanks to goals from Anthony Martial and Bruno Fernandes.

The latter scored the winning goal in the 61st minute after standing up to the penalty spot.

Referee Michael Oliver and VAR were in agreement over the penalty after Douglas Luiz was adjudged to have fouled Pogba.

Some, like Villa boss Dean Smith, will argue that it was a ‘soft’ penalty decision but Luiz was all over the Frenchman.

Rio Ferdinand believes that it was the right call from the officials.

Former Premier League strikers, Daniel Gabbidon and Gabriel Agbonlahor, both think the officials got it wrong.

Never been a penalty 🤨

United are now level on points (33) with Liverpool at the top of the Premier League.

Villa, on the other hand, are doing very well to be positioned sixth in the top flight after scrapping for points to stay in the Premier League last term.