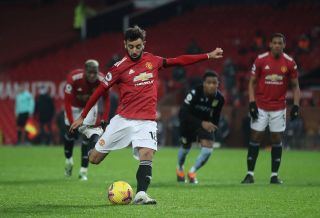 The Red Devils are joint first on 33 points after 16 matches so there’s plenty of reasons to believe this will be a better year than 2020. Last season we finished third but that looked an almighty task in January, prior to Fernandes’ arrival from Sporting.

It was United’s eight win in 10 Premier League games, but Fernandes knows that there’s plenty of work to work do if we’re going to get our title back.

“I think we are building something important,” Fernandes told ManUtd.com. “We know that. The most important for us is building a team. Building a group of players who take care of each other.

“Today it was Eric (Bailly making a stoppage-time block) before it was David (De Gea) saving that ball, in other situations other players, but the main thing is the group has to be together.

“As I sit in the stands in the last two or three minutes, everyone is shouting and hoping to don’t [sic] concede a goal and to take care of the ball.

“I think it was tough but we have to learn from here. Also from the Leicester game (on Boxing Day which ended 2-2) we have to do much better.

“We have some situations on close the game. You have to close.”

Fernandes was happy with his team-mates against Villa, especially Paul Pogba, saying: “I think today Paul was top. The first goal he makes a good skill, he comes off from a player so easily.

“But we all know the qualities he has. I think it is not in doubt.

“I hope people is not in doubt on the qualities of Paul because we know he can play, he can help us and he can play really well, and today he did it. He was (involved) in both goals.

“In the penalty you see one of the best he can do, cover the ball and going away from his player, and I think he will give more and more and more with the confidence coming game after game.”