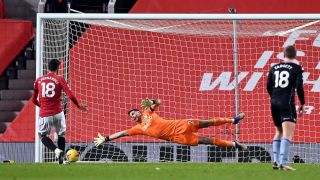 Anthony Martial gave United the lead before half-time following a superb Aaron Wan-Bissaka cross. In the second half, however, Bertrand Traore equalised for the visitors.

A penalty was given after Douglas Luiz fouled Pogba inside the box.

Dean Smith was fuming when he spoke to Sky Sports about the incident and went on to claim that Pogba tripped over himself, but if you’re all over an opposition player (as he admits Luiz was) then there’s a fair chance you’re going to cause them to trip over themselves.

Luiz also gets a clip on Pogba if you watch the footage closely.

VAR acknowledged that by supporting referee Michael Oliver’s decision to award the penalty.

Martinez, who joined Villa in the summer from Arsenal, took to Twitter after the match to give a four word reaction to the penalty: “Highlight of the game.”

Highlight of the game 😡 https://t.co/GZZJhCOsMs