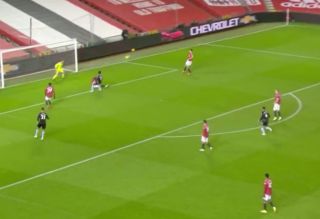 The Ivorian’s inclusion against Villa represents a significant step in his United career as it is the first time Bailly has made four success starts for the club since September 2017.

He has performed well of late and I think he partners Harry Maguire better than Victor Lindelof because he’s got the pace we lack whenever they combine in the heart of defence.

Bailly made a superb last ditch header in the first-half tonight against Villa, with the scoreline still 0-0.

He gets ahead of his man quickly and makes a great effort to clear the ball.

United need to up the tempo a bit…