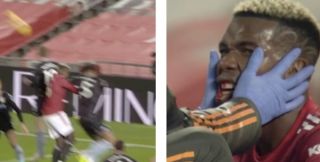 Pogba found himself eyeing up a United corner but and despite attempting a near post run, the midfielder was met with a nasty looking elbow by Villa’s Mings.

United’s number-six was left in a bloody heap inside the box.

Despite there being no VAR intervention it became clear upon closer inspection that Mings’ body shape was questionable, to say the least.

Should the Villa defender have been punished for his attempt to win the ball? – Let us know in the comments.