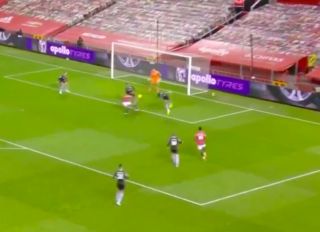 Manchester United lead against Aston Villa after a wonderful move was finished off by a brave header from Anthony Martial.

Ole Gunnar Solskjaer’s men have played with good tempo in the first-half at Old Trafford and have taken advantage before half-time.

And the creator was an unlikely source, with Aaron Wan-Bissaka supplying Martial with a pin-point cross from the right-hand side after showing ambition on the overlap.

Wan-Bissaka was found brilliantly by Marcus Rashford and crossed for Martial to nod past Emiliano Martínez.

United can go level on points with Premier League leaders Liverpool if they hold onto their lead against Dean Smith’s side.

See the opening goal below, footage courtesy of Sky Sports:

Tyrone Mings misses his attempted clearance and Anthony Martial punishes him by heading beyond Emi Martinez from close-range! 😬