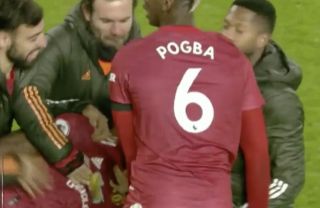 Ole Gunnar Solskjaer is building a championship winning team. The togetherness among the Red Devils’ ranks is really becoming apparent and nothing has showcased that more than the scenes at Old Trafford after Friday’s final whistle against Aston Villa.

Unsung hero for the second time in as many weeks Eric Bailly put in yet another fine display after being tasked with keeping Jack Grealish and co. quiet in the Premier League.

The flamboyant centre-back had a fine game with his best moments coming seconds before the end of Friday’s match against Villa which ensured his side took all three-points in a 2-1 win.

As the referee blew for full-time the majority of the United squad were spotted praising Bailly for his defensive efforts.

United’s 2-1 win over Dean Smith’s Villa now sees them level on points (33) with rivals Liverpool at the top of the Premier League.