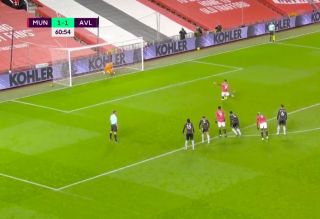 Villa have been brighter in the second-half and scored their equaliser through Bertrand Traore after United were caught off guard from a quick free-kick.

But Ole Gunnar Solskjaer’s men were given the perfect opportunity to regain their lead just three minutes later.

Paul Pogba, who has been potent in the left-channel for the Reds, cut inside and was brought down by Douglas Luiz in the box.

United’s indispensable midfielder then made no mistake from the spot, firing low past Emiliano Martinez.

See the goal below. Footage courtesy of Ziggo Sport and Sky Sports:

Clinical from the spot. 🎯