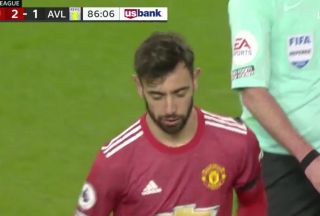 Bruno Fernandes was viably frustrated at being taken off with four minutes to go against Aston Villa at Old Trafford tonight.

The Portuguese international put in another solid display and scored from the penalty spot to give Manchester United the lead quickly after Aston Villa equalised.

Fernandes is a player which hates being left out and wants to play every minute. As well as that he’s determined to win every game and hopefully that leads to trophies.

Daniel James was the player who replaced Fernandes — to cope with the pace Villa have on the counter attack.

Pictures below via NBCSN:

While Donny van de Beek was on the bench, I can see why Solskjaer brought the Welshman on instead but I’m sure it will cause a stir throughout the night on social media – regardless of result.