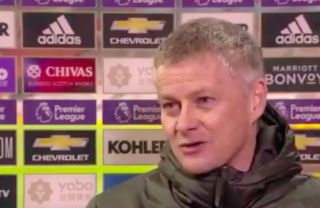 United have moved level on points with Liverpool at the Premier League’s summit after goals from Bruno Fernandes and Anthony Martial secured a thrilling win over Dean Smith’s side.

But the Reds were holding on in the final moments and had to rely on a decisive block from Bailly just as Villa looked destined for a dramatic equaliser.

Solskjaer admitted at full-time he did not enjoy the chaotic nature of the final ten minutes that he compared to a cup final or last game of the season.

The United manager described Bailly’s late block as ‘fantastic’ as the Ivorian defender justified his fourth straight start and sparked joyous scenes at the final whistle.

Anyhow, the Reds have made the perfect start to 2021 and may well have put themselves in contention for a title charge…

🗣 "I didn't enjoy the last 10 minutes that much, seemed like it was a cup final or last game of the season"