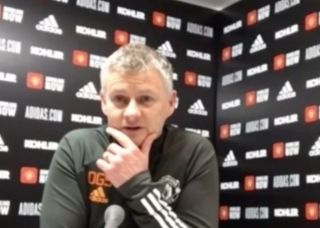 Manchester United are ready to welcome Amad Diallo to Old Trafford after Ole Gunnar Solskjaer confirmed there are no more obstacles to the young winger’s arrival.

Solskjaer confirmed United are excited to start working with Diallo after his side moved level on points with Liverpool at the top of the Premier League table with a 2-1 victory over Aston Villa.

Bruno Fernandes and Anthony Martial netted the goals for the Reds and United are about to welcome another attacking player to their ranks.

“Amad, we’ve had all the paperwork, I can’t see any obstacles,” Solskjaer said in his post-match press conference, as quoted by The Athletic’s Laurie Whitwell.

“Hope very soon he will be with us. Very excited to have him in. He’ll need time to develop. Apart from that I’m not thinking too much about (January).”

United confirmed the capture of highly-rated Ivorian teenager Diallo from Atalanta on the final day of the summer transfer window.

The club have been working towards sealing a work permit for the 18-year-old and the logistics behind the move appear to have been finalised.

Diallo is considering one the most talented young wingers across Europe but he remains very inexperienced at first-team level and Solskjaer has confirmed he will need to time to develop before having the chance to make his mark.

Listen to Solskjaer speak out Diallo post-match below: