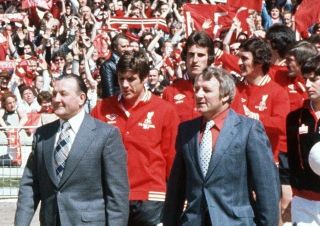 We were saddened to hear on New Years Eve, former Manchester United manager Tommy Docherty had passed away aged 92.

Tommy Docherty was in charge of Manchester United from December 1972 to July 1977, winning the Second Division title as well as the FA Cup in 1977 against Liverpool to stop the Scousers winning the treble.

It was be only fair to say his time as United manager was tumultuous.

He had to deal with relegation from the top-flight but managed to get the Reds back up at his first attempt, playing some of the finest attacking football United fans have ever seen.

He still managed to get the better of a Liverpool side that won the old First Division and the European Cup in the same season as losing the FA Cup to United. That’s when United stopped the Scousers doing the treble — a feat only one English club has achieved, in 1999.

Docherty will be fondly remembered. May he rest in peace.