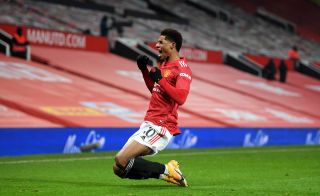 Marcus Rashford has called on his Manchester United team-mates to end the club’s trophy drought in 2021.

Rashford, who was very much the hero of 2020 in the UK, has become one of United’s best players after coming through the academy, which he joined back in 2005.

The young England forward scored his latest goal for the club against Wolves during the week.

United are positioned 2nd in the league with a game in hand on the Scousers. Tonight they take on a decent Aston Villa side at Old Trafford knowing a win is needed to stick to Liverpool’s heels.

It’s too early to make title predictions, but United are looking good at the moment and Rashford has been speaking about the Reds’ trophy ambitions.

“The platform has been there for a while and in this last year we’ve taken greater steps forward which is obviously a positive for us,” Rashford told ManUtd.com. “We missed out on winning some trophies, losing in the semi-finals and that’s what we need to correct in the coming year and make sure we get over the line and win trophies.

“That’s the next thing for us to do as a team then it’s about doing it consistently and being able to repeat it back-to-back which is more difficult than getting it the first time.

“We’ve still got a long journey ahead of us, but at the moment we’re in a good place and we’re concentrating on ourselves and our team and just trying to improve ourselves in each game.”

It’s important to note the amount of hurdles we’ve overcome this season. If Solskjaer can continue this form with the side, or get even more out of his players, we stand a very good chance.

A positive difference to how we’ve started the new year in recent seasons.