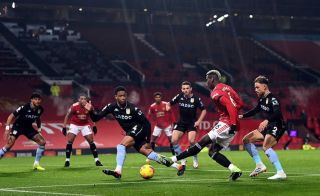 Alert to keep out John McGinn and great reaction save to deny Ollie Watkins. 7

Crossed superbly for Martial’s opener but inexcusably switched off to allow Grealish to create equaliser. Made a crucial interception with great athleticism at back post when El-Ghazi looked destined to score. 6

Maguire looks more at ease in partnership with brisk Bailly. Another solid showing from United’s skipper. 6

Threatening on the overlap and rarely exposed down his flank in defence. Shaw has shown great consistency since Alex Telles was signed. 7

Proving undroppable in Solskjaer’s best midfield despite some sloppy moments in possession. Showed relentless energy and made number of crucial interceptions. 7

Central to United’s most potent play and unfortunate not to get on the scoresheet. United are a more dangerous team with Pogba on the front foot and he showed his quality in the final third. 8

United’s talisman delivered again with his 15th of the season from the spot. Fernandes came to life in the second-half with a series of glorious touches and a stunning effort. 8

Stepped up with fine header to give United lead and a good focal point for the Reds. Drifted slightly after the break but goal should breed confidence. 7

Eager to shoot and and a constant danger without a decisive moment. Never tired and showed great ambition. 7

Brought on to help regain control but Villa remained potent until the end. 5

Rapid on the counter-attack but final ball was poor. 6