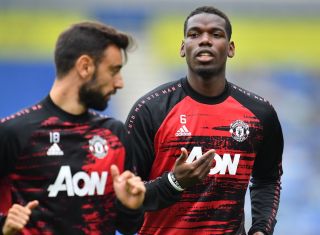 Ole Gunnar Solskjaer has made some key changes to his Manchester United lineup to face Aston Villa in the Premier League at Old Trafford.

United can move level on points with leaders Liverpool with victory over Dean Smith’s in-form side in their first game in 2021.

And Solskjaer appears to have sprung a surprise in his formation by reverting to a diamond midfield.

Paul Pogba, Fred, Scott McTominay and Bruno Fernandes all start in what we presume is a midfield quartet with indispensable Fernandes at the apex supporting Anthony Martial and Marcus Rashford up front.

Martial returns to lead the line after Edinson Cavani was banned for three games for an Instagram post that was seen as offensive in some contexts, as per the BBC.

Alternatively, Pogba could take up an unfamiliar position on the left-flank in a triple-pronged attack with Rashford on the right.

Meanwhile, Eric Bailly retains his place in central defence alongside skipper Harry Maguire after a man-of-the-match showing against Wolves.

Luke Shaw returns to left-back ahead of Alex Telles after coming on for the Brazilian at half-time in Tuesday’s victory.

Diamond midfield for United, or Pogba/Fernandes on the left? Seen Pogba out in that role during games a couple of times recently #mufc

Solid lineup, but I hope it's not a diamond- Fred at the base of a diamond with McTominay and Pogba flanking caused huge structural issues in buildup against Arsenal https://t.co/A91lljC67S

Don't mind this, though could see Fred Sauce as a two, Pogba left and Rashford right.

Wherever they play, win is the important thing.

Great to see Bailly getting a run too. https://t.co/1aBTEvdTTB

What are your thoughts on the team for tonight?!

Looks like the diamond set-up – Pogba LCM with Bruno in the pocket.

McTominay, AWB and Fred forming a triangle down the right to try and counteract Grealish. #mufc

Looks like 4-2-3-1 for #MUFC with Pogba on left of three. Solskjaer specific after Man City game that was system he played, rather than diamond.

Interesting to see Fred, McTominay, Pogba and Fernandes all start tonight. Midfield diamond or Pogba off the left, Rashford off the right? A lot of possibilities. #MUFC

Looks to be a diamond, possibly Pogba on the left with McT/Fred at the base/on the right.

I wouldn’t be surprised if it was a 4231 thought with Pogba playing off the left.