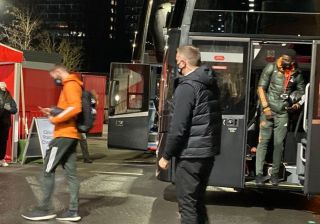 The players have arrived at Old Trafford ahead of tonight’s Premier League clash against Aston Villa.

Aston Villa are currently placed 5th in the Premier League so this will be no walk in the park.

Ole Gunnar Solskjaer will hope his players can build on their form of late by showing the Premier League that we can be consistent and challenge for the title.

The squad was pictured getting off the team bus at Old Trafford, with team news not expected until 19:00.

United’s defence will need to be at its best tonight because Villa have been one of the more impressive teams this season. I don’t expect them to stay so high in the top half of the table, so I still fancy us to get three points.

Check out our match preview for a bit of pre-match reading.