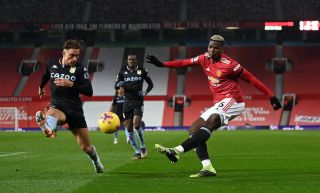 Paul Pogba is not free of criticism here at Stretty News, but the Frenchman performed tonight against Aston Villa and it’s very a matter of credit when it’s due.

Ole Gunnar Solskjaer is handling the Paul Pogba situation wonderfully — not only choosing the right games to play the World Cup-winning midfielder, but also to ensure he performs when selected.

We already know he’s not one of our most consistent players but Pogba on his day is unplayable.

Although it wasn’t his best game in a United shirt, Pogba was influential throughout and kept the team ticking all over the pitch.

MUTV presenter Statman Dave tweeted a number of statistics which take a close look at Pogba’s individual performance against Villa.

He managed a 77% pass accuracy, with 26 passes made in the final third.

On top of that, Pogba managed 6 ball recoveries and won 5 aerial battles as well as two tackles in 90+5 minutes.

The biggest impact Pogba had on the match was winning the penalty for United’s second goal.

Bruno Fernandes stood up to the penalty spot to win the game after making the scoreline 2-1 in United’s favour.