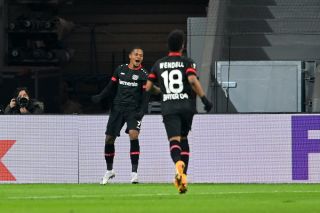 Manchester United target and Bayer Leverkusen star Leon Bailey has sparked rumours he could be set for a transfer sooner rather than later after teaming-up with the same agency who represent Aaron Wan-Bissaka and Axel Tuanzebe.

Bailey, 23, joined Bayer Leverkusen back in 2017 from Genk in a deal which cost the Bundesliga side just £12.15m, as per Transfermarkt.

Since the talented winger’s arrival in Germany nearly four-years ago, Bailey has gone on to emerge as a key player for Die Werkself.

Arguably the Jamaican’s best patch of form has come during the first part of the 2020-21 season.

In light of the 23-year-old’s exciting form, there have been recent suggestions that United have earmarked him as a possible alternative to Borussia Dortmund’s Jadon Sancho.

These earlier rumours have since been turned up a notch after a report from Daily Mail emerged claiming that Bailey has switched agencies.

Despite the winger’s contract with Bayer Leverkusen running until 2023, a player’s willingness to swap representatives is usually a clear indication they’re thinking about their future.

Would you prefer to see United sign Bailey or stick with Sancho? – Let us know in the comments.