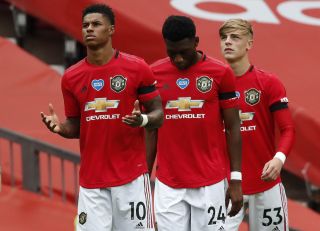 Manchester United defender Timothy Fosu-Mensah has reportedly rejected a new contract amid increasing speculation the Dutchman could be set for an Old Trafford departure.

Since rejoining the club’s first-team in 2019, Fosu-Mensah has struggled for game time and has managed just 30 senior appearances in all competitions.

The versatile defender who can operate as either a full-back or a centre-back has featured just three times this season and with his contract set to expire next summer, there has been some suggestions the 22-year-old could move on.

Speculation surrounding Fosu-Mensah’s future has been intensified after a recent report from the Daily Mail emerged claiming the young defender has rejected a four-year contract offer.

The Daily Mail claim that alongside a number of Premier League clubs, Monaco, Marseille and Hertha Berlin are also interested in signing the 22-year-old.

Fosu-Mensah will be free to speak to foreign clubs as early as Friday.