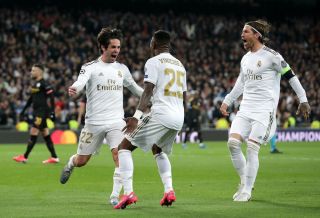 Isco, 28, joined Real Madrid from Malaga in 2013 in a deal which cost Los Blancos £27m, as per Transfermarkt.

Since his arrival in Spain, Isco has enjoyed a hugely impressive seven-year spell with the European giants.

Featuring in well over 300 matches for Real Madrid, Isco’s 106 direct goal contributions have had a huge hand in his side lifting 16 major trophies, including a whopping four Champions League titles.

However, despite the talented Spaniard’s largely successful time in Madrid, the 28-year-old creative midfielder has recently found himself fall out-of-favour with manager Zinedine Zidane.

Struggling for game-time, Isco has started in just three La Liga matches so far this season with his time at the Santiago Bernabéu rumoured to be coming to an end.

According to a written report from Spanish outlet AS (via Sports Witness) Isco is on the radar of Ole Gunnar Solskjaer’s Red Devils.

AS claim that United’s hierarchy are ‘interested’ in the Spanish playmaker’s situation at Real Madrid and have ‘sufficient economic capacity’ to cover his £6.3m yearly salary.

However, despite the outlet acknowledging Isco’s talent and United’s financial advantages, they claim Sevilla are favourites to land the 28-year-old due to the player reportedly preferring to stay in Spain.

AS report that despite United’s admiration of Isco, the Red Devils are unlikely to make a move in January due to other areas of the squad needing reinforcements.

With the likes of Bruno Fernandes, Donny van de Beek and Paul Pogba all able to fulfil the same role Isco plays in, it is unlikely the United faithful will ever see Isco turn out at Old Trafford… But nevertheless, what a move it would be.