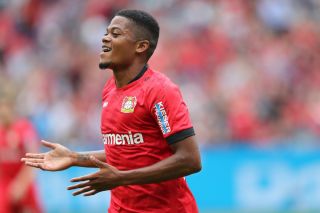 Manchester United, Tottenham Hotspur, AC Milan and Borussia Dortmund could be set to battle it out for Bayer Leverkusen star Leon Bailey, but may have to wait until the summer, despite the player pushing for a January move.

Bailey, 23, joined Bayer Leverkusen in 2017 from Belgian side Genk in a transfer which cost the Bundesliga side £12.15m, as per Transfermarkt.

The Jamaican attacker who primarily operates as a right-sided winger has enjoyed a hugely impressive start to the 2020-21 campaign.

After featuring in 18 matches so far this season, Bayer Leverkusen’s 23-year-old has racked up a hugely respectable 16 direct goal involvements, in all competitions.

Bailey’s electric form has sparked speculation that he could become a serious transfer target for some of football’s biggest clubs.

It was reported by the Daily Mail earlier this month that several top-flight clubs, including United have instructed their recruitment specialists to scout Bailey whilst in Europa League action.

Speculation continued to mount after more recent reports emerged claiming the 23-year-old winger has switched agencies, sparking suggestions the Jamaican could be considering his options.

Stretty News has recently obtained exclusive information from a source close to the player who has revealed that United are one of four top clubs seriously interested in the star.

It has also been revealed to us that Bailey is desperate to secure a January transfer but has been professionally advised to remain patient and wait for the summer window to open instead.

We understand that Bayer Leverkusen’s highly-rated wide-man would welcome a move to any of the four interested clubs but is likely be forced to wait for a transfer for at least another six-months.

The only way fans are likely to see Bailey depart Bayer Leverkusen in January would be if the 23-year-old handed in a formal transfer request, something no one close to the player is expecting to happen.

However, with the summer transfer window just a matter of months away, it does appear that Bailey could become one of the most talked about transfers of 2021.

Bayer Leverkusen are unsure at this stage which club out of the interested parties are most likely to make the first move.

However, the German club are accepting that any future approaches for their star man will depend hugely on each club’s position come next year’s second financial quarter, as well as their own.