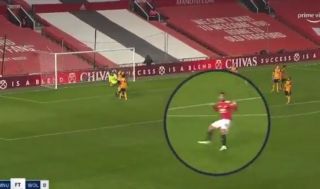 United battled hard to open up Wolves but they were well organised with every movement. An infuriating team to play against when they’re set up so defensively, but the Reds got what we deserved with a late winner.

Rashford’s 94th minute goal was the only real moment of note — and it was enough to give Ole Gunnar Solskjaer’s side three points in the title race which will heat up in the New Year.

As Rashford found the back of the net, Bruno Fernandes, who assisted the goal, loses control and celebrates with joy.