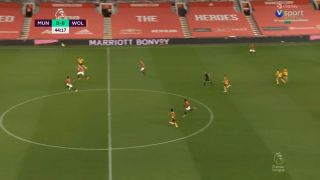 Keep Eric Bailly fit and he will be important to Ole Gunnar Solskjaer’s defence this season.

Sometimes it’s a matter of Bailly keeping himself fit — because a lot of injuries he has suffered since joining United have come from tackles he didn’t need to make.

He’s 26 now and is expected to mature as a player. The way in which he checked Adama Traore on the half-turn before making a crucial inception had me thinking how better off United would be with Bailly playing at his best.

It would help Harry Maguire as much as the rest, with Bailly being one of United’s quickest defenders and he did okay in the recent draw against Leicester City.

Traore is no slug for a big guy. He’s rapid but Bailly reads the situation superbly and took United away from danger.

Eric Bailly was so so good here. Checked Traore on the half-turn & noticed that Maguire had his man and decided to go to Traore's side pic.twitter.com/rYI1xKfu0J

We spoke about Bailly on the Strettycast this morning. Check out the snippet below from the podcast.