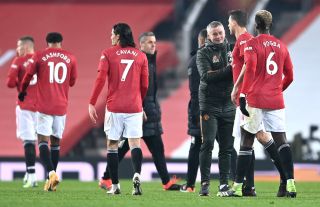 We recorded our latest podcast this morning after Manchester United’s 1-0 win over Wolves.

There hasn’t been an episode of the Strettycast since we previewed United’s Carabao Cup quarter-final against Everton. Since then Ole Gunnar Solskjaer’s side has qualified for the semi-finals of the competition, drawn away to Leicester City and beat Wolves 1-0 at Old Trafford last night.

United had to grind out a win against Wolves who are a very organised side. The first goal was always going to be important, and thankfully it was United who got it in stoppage time.

The win sees United rise to second place in the Premier League. Hopefully in 2021 we can challenge for the title and continue to show the form we’re in currently.

We also cast a wish for 2021 and do our best to keep it realistic.

I simply want to see United challenge for the title so that this squad gets a taste of what it’s like because most of them haven’t experienced this before — it’s been that long since we’ve won it!