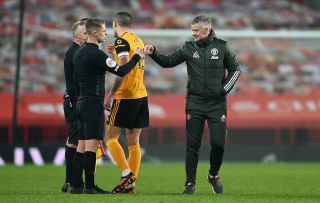 Manchester United are within two points of leaders Liverpool after a 1-0 win over Wolves last night, but manager Ole Gunnar Solskjaer appears keen to distance the team from this season’s title race.

It’s early days and Solskjaer doesn’t want to count his chickens before they hatch.

At the same time, albeit behind the scenes, I’m sure he’s trying to drive his players towards that title challenge.

Having won the Premier League as a player under Sir Alex Ferguson, it’s now Solskjaer’s job to do it as a manager but this season may be soon for the Norwegian and his players.

So long as the players get a taste for it this season I’ll be happy. It would be a relief to see United challenge Liverpool and go a couple of more months winning matches and keeping the pressure on.

Speaking after the win over Wolves, Solskjaer revealed that he is thinking little of the fact that United are just two points shy of leaders Liverpool. He believes it’s too early to consider United title contenders.

“There’s no title race after 15 games,” Solskjaer said, as per The Independent. “You can lose the chance of being in a race in the first 10 games, of course you can.

“But play another 15, get to 30 and then maybe we can start talking about a title race, when you get to March or April, when we have at least played more than half a season.”

We’re doing a lot better than City this season, but I’d imagine they will start climbing up to table in the New Year.

And for all the talk about Chelsea being title contenders a few weeks ago, you only need to look at their recent results to see how quickly it can slip out of your hands.