Ole Gunnar Solskjaer has a number of selection dilemmas ahead of Manchester United’s first game of 2021 at home to Aston Villa.

United ended the year in second place in the Premier League after Marcus Rashford’s late winner against Wolves, but Solskjaer didn’t elicit the performance he desired after making six changes.

Friday’s game against in-form Villa is likely to be a much different encounter, with Dean Smith’s side less pragmatic in their approach.

Dean Smith’s side are unbeaten in five in the league and deservedly sit in fifth place after an impressive start.

We expect Solskjaer to rotate his side again as United look to maintain their momentum in the league against tough opposition.

Alex Telles was forced off injured at half-time against Wolves and Luke Shaw should resume his role at left-back.

Eric Bailly was Stretty News’ man-of-the-match on Tuesday and should retain his place alongside Harry Maguire, regardless of whether Victor Lindelof makes a full recovery from his injury.

The midfield axis of Paul Pogba and Nemanja Matic wasn’t effective for large spells last time out and the familiar double pivot of Scott McTominay and Fred could return.

Alternatively, Solskjaer may opt to keep Pogba in his starting lineup as he adds potency to United’s attack.

Mason Greenwood was substituted early against Wolves but deserves his chance again and is United’s best option from the right side.

Bruno Fernandes and Marcus Rashford are Solskjaer’s indispensables at the moment, and should support Anthony Martial in attack.

Edinson Cavani was left isolated against Wolves and while Martial wasted some openings on Tuesday, he could return to lead the line for the Reds if Solskjaer chooses to rotate his attack. 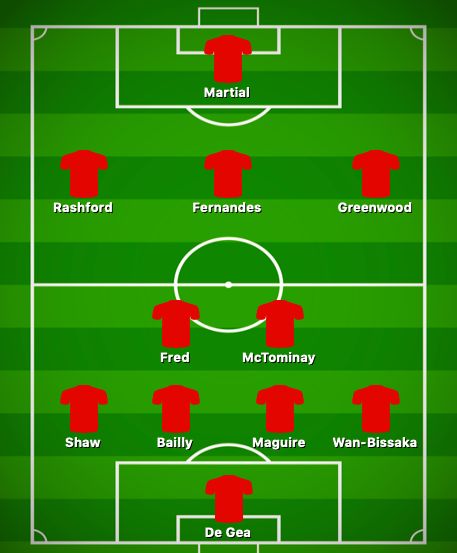