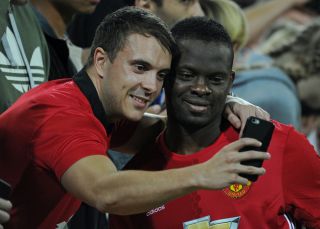 I mean, as things stand, of course we are. A acknowledging that is not evidence of someone getting ahead of themselves. Manchester United are in a good position right now and if they continue getting results Ole Gunnar Solskjaer’s side will challenge for the title.

“Liverpool are definitely the ones to beat for the Premier League title this year,” Saha said in an interview, cited by Metro.

“Jurgen Klopp has such a great group of players who are eager to win every single game.

“They have so much strength in depth and you can feel their frustration when things aren’t going their way. It’s a quality a lot of other sides are lacking.

“It’s a lot more difficult for Man City this season because in terms of creating chances, it feels very much like Kevin De Bruyne is on his own now since David Silva left the club.

“There’s now less guarantee in that Man City side winning games and ultimately the title than there is in Liverpool.

“I’d probably say there are four or five teams in with a genuine chance of winning the title.

“I’d definitely put Man United in there, Tottenham in there for sure as well. Chelsea have a good chance too, as well as the obvious two.

“I’m actually loving the competitiveness of the Premier League this season. Football needs it.

“When you look at leagues like Spain and France where it is always the same one or two teams — it’s great to see such a wide-open league in England.”

Last night saw the Reds overcome a decent Wolves side. I wouldn’t go as far to say they’re better than they were last season because that couldn’t be further from the truth, but they’re organised and infuriating to play against at times.

However, Liverpool are aiming to defend the title this season after Jurgen Klopp guided them to their first league success in 30 years.

I hate saying it but the Scousers won it in style by claiming the title with seven games to spare — finishing 18 points ahead of runners-up Man City, who are 8th in the league table right now.

We finished third last term and I think we’re seeing more progress in the league this time around.

It’s crazy to think not long ago it looked like the board had a decision to make over Solskjaer’s position, especially when the players fell to a 6-1 defeat against Tottenham at Old Trafford.

The Norwegian deserves a lot of credit for turning things around in the league — currently two points off leaders Liverpool — and hopefully he can keep it going for the remainder of the season.