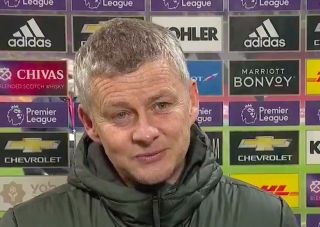 Ole Gunnar Solskjaer refused to be drawn into talk of a Premier League title challenge after Manchester United defeated Wolves at Old Trafford.

The Reds now end 2020 second in the league, just two points behind bitter rivals Liverpool having played the same amount of games.

Solskjaer was unsurprisingly asked about whether United can contend for their 21st domestic crown this season, but the Norwegian boss is choosing to not look too far ahead.

"We're disappointed we didn't play as well as we could've"@ManUtd hero Marcus Rashford has his feet firmly on the ground after netting a vital injury-time winner against Wolves 👊#PLonPrime #MUNWOL pic.twitter.com/pRBo7xzIfI