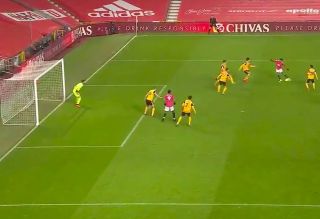 Finally, we crossed the line! The first time we’ve beaten Wolves in a league match since they returned to the Premier League.

Edinson Cavani had a goal ruled out for offside but this one will count.

Manchester United have been pushing for a goal while Wolves have defended pretty much throughout the match, so the goal is more than deserved for Ole Gunnar Solskjaer’s men.

It’s United’s 19th goal after the 80th minute in the Premier League this season to put us second in the league behind leaders Liverpool.

Marcus Rashford knew he had support arriving in the box but he went for goal himself and got the goal.

A huge three points for the Reds and we’re only two points behind the Scousers now.