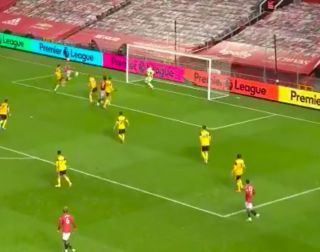 Manchester United are having familiar problems breaking down a resilient Wolves defence at Old Trafford.

Ole Gunnar Solskjaer has made six changes to his side this evening but there has been few clear-cut  chances in a game the Reds need to win to end 2020 in second in the Premier League.

United’s best chance came in the 34th minute after a superb cross from Mason Greenwood on the right-flank.

Greenwood has struggled to make a profound impact in the first-half but his floated delivery almost created the decisive moment.

The teenager cut inside and found Bruno Fernandes at the back post, who had his volleyed effort saved by fellow Portuguese international Rui Patricio.

See the chance below. Footage courtesy of Amazon Prime: